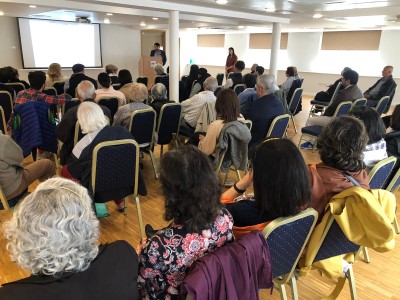 After a COVID induced gap in our calendar of events, the annual seminars have resumed with a bang.  Despite it being Jubilee weekend, in fact the attendance was excellent and our hall at WZH was very full with over 60 people coming early to hear the speakers from the very start.  We were possibly the first major in-person gathering to be given insights into this new cutting edge research at Oxford University.

It was our good fortune to be introduced to the Invisible East programme by its director Dr Arezou Azad who has been focussing on the history of regular people (hence Invisible) rather than of the rulers and of those wielding central authority and influence.  Her area of interest and research can be loosely called the “medieval eastern Iranian world ” which encompasses regions that were once within the Sasanian empire and whose culture was therefore Iranian-influenced.  Arezou explained that very little was known about the everyday life of the average person, since most histories were written by official scribes and persons commissioned to write histories.  And in fact there are not anyway too many of such histories from close to the time of the events in existence.   However by happy coincidence, Arezou became aware of the existence of small collections of written fragments on paper, parchment, pottery sherds, papyrus, cloth, birch bark and other surfaces in different locations across Iran, Central Asia and western China dating to the immediate centuries before and after the arrival in the 7th and 8th century of Islam in the region.  One important collection with a large number of such sources, so far largely unresearched, and originating in Afghanistan, is one at the National Library of Israel.  Arezou explained that they are there because a small number happen to be written in Hebrew characters expressing the New Persian vernacular, and therefore attracting the interest of Israeli scholars. However it turns out that only a few are in fact in Hebrew lettering, while several other languages are to be found in the Arabic lettering within the collection. Arezou’s ability to bring together a team of specialists in a variety of the relevant languages which include Pahlavi, early New Persian, Khotanese, Sogdian, Bactrian and Arabic meant that she was able to attract considerable funding for the research that her team are now undertaking.  Her own specialist interest of what they might show about everyday life – about how people married, how went about their daily business, how farmers interacted with the state, etc – allows a new insight into the preoccupations and issues which dominate their concerns.

Within the Invisible East team is Professor Hugh Kennedy, a well known and widely published academic whose interest has been the history of the medieval caliphate of the Abbasids based in Iraq and extending across the former Byzantine and Sasanian territories.  More recently he has chosen to research the eastern region that is the focus of the Invisible East programme in its broader historical context.  At the seminar Hugh spoke of the initial conditions put upon all religious groups that the Islamic conquerors came upon.  He pointed out that alongside the state religion of Zoroastrianism, there were Christians, Jews, Buddhists and others within the area.  According to Islamic tradition, Zoroastrians were accepted and treated as “people of the book” under the Caliphs. but there were tax and employment penalties imposed.  He suggested that those disadvantages were felt much more among the ruling classes and aristocrats rather than the ordinary people and that there was no sudden forced mass conversion.  Rather he argued for a gradual attrition over the initial centuries when Islam arrived in Iran after the defeat of the last Sassanian monarch Yazdegerd III.  Hugh stressed that the sources of information were scant for what actually happened with the indigenous population at the time of the conquests in the 7th and 8th centuries, and it would not be helpful to preempt future evidence which might come to light. He ended his talk pointing out that the situation of Zoroastrians after this initial period became more tenuous in the mid-Abassid caliphate and into the Mongol period (9th to 13th centuries).

Also within the Invisible East team is Dr Thomas Benfey whose paper was read by Arezou as he was in America. Though it was shorter than the other presentations, his diligent work on deciphering one of the fragments found in Middle Persian on papyrus held a fascinating content.  It clearly related to a period of time very soon after the takeover by the Arabs and concerned the Zoroastrian owner of a vineyard.  The author of the fragment was writing to the new overlord of the land, querying why he was being asked to pay tax when it seems that he had turned over some land that had been unproductive to now producing grapes and might have expected recognition for this.  In Sasanian practice (and amongst Zoroastrians to this day), rendering arid or boggy land into land that can be cultivated so as to be productive is meritorious, so it is clear that something was not going according to the petitioner’s expectations.   While there was a tantalising absence of resolution to this matter in the fragment, it is precisely this sort of discovery that is exciting and can lead to hypotheses and further discoveries.  The relationship between alcohol and Islam is one of the obvious issues of interest.

When the morning talks came to an end, the action moved up to the Setayeshgah where WZO’s resident priest, Ervad Fali Madon, conducted his usual weekly Boi, but with the added dimension of honouring HM The Queen on the occasion of her Platinum Jubilee with a recital of the Tan Dorosti prayer.  Most of the attendees managed to squeeze into the prayer room for the occasion and for some this was the first experience of a genuine Zoroastrian ceremony. 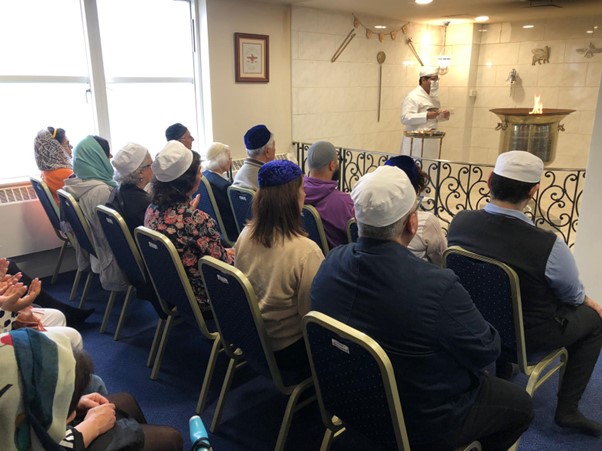 Then there was lunch – an unexpected bonus for those present.

Finally, Dr Arash Zeini, a philologist specialising in Middle Persian and Zoroastrianism also working in the Invisible East programme presented a somewhat radical theory: namely that the effort to translate the Avestan texts into Middle Persian may have triggered the canonisation of the corpus of prayers we know as the AVESTA, which may not have existed as a formal corpus beforehand.  It is accepted that there was a major effort to collect and re-organise Zoroastrian prayers and texts brought about in the early years of the Sasanian dynasty, it is thought on the order of  Tansar, and then continued by other high priests but there is no indication that they were known as the Avesta.    Around this time a specific written phonetic alphabet (referred to as Din Dabireh in Persian and the Avestan script in the West) was created to faithfully transmit the orally preserved religious recitations and while there were undoubtedly oral prayers, according to Arash they were disjointed and may not have existed as a canon of sacred religious texts.  He suggests that maybe the Zand translations of these separate prayers could have given rise to the creation of a coherent body of prayers configured in the older language.  The Middle Persian word ABESTAG (whose etymology is not certain and disputed) is not referred to nor attested anywhere till the Zand translations  and it is significant that the oldest written manuscript of any part of the Avesta only dates to 1323 (held in Copenhagen).

This intriguing  theory is one of the research areas which Arash is pursuing and it is likely that we will hear more on the topic in due course from both supporters and detractors of his theory.

WZO is extremely grateful to the speakers from the Invisible East team and hopes that with more significant insights emerging, there may be a future occasion on which we can be updated with other researchers sharing their findings with us.