Mehregan: The Zoroastrian Celebration of Autumn 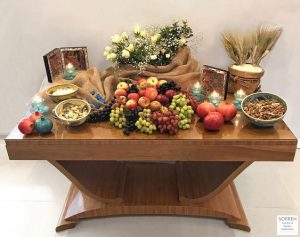 Saturday 2nd October 2021 is the Zoroastrian celebration of Mehregan. We take the opportunity to publish an article about this festival to increase understanding of its history and meaning.

This article has been kindly contributed by WZO Member, SOAS scholar and fellow Zoroastrian Pablo Vazquez.

Mehregan (also known as Jashan-e Mehr) usually occurs in the first week of October depending on the alignment of both the Solar Hijri calendar used officially in Iran and the Fasli calendar used by many Iranian Zoroastrians. This alignment occurs when the day of Mehr occurs in the month of Mehr according to these calendars. It is a multi-faceted holy festival that celebrates the Yazata Mithra (known also as Mihr or Mehr), our divinity and hypostatis of promises, friendship, relationships, and covenants who appears in most Zoroastrian scriptures from the Gathas of Zarathushtra onwards, along with the commemoration of other stories important to the Zoroastrian tradition. It is also the Zoroastrian equivalent of the Autumn Equinox which traditionally occurs September 21/22 in the Gregorian calendar.

Mehregan was usually celebrated by Zoroastrian communities in both Pre-Islamic and Pahlavi times as a commemoration of the end of the harvest and the beginning of the Winter season. Records of its celebration have been noted by ancient and medieval authors as having occurred in Pre and Post-Islamic times in not just the core of the Iranian lands but also Yemen, Egypt, China, India, and moreso. The associations with Mithra were detailed as a holy reminder of our mutual promises and duties with the divine reflected by a good harvest and sustenance for the coming Winter watched over by Mithra and Ahura Mazda.

Mehregan was a time of great celebration considered even on the same level as Nowruz with the amount of pageantry and glorification. The imperial courts in Persepolis connected the holy day with tax and tribute collection thus great feasts and spectacles were assembled as nobles, priests, tributaries, and a wide range of denizens of the Persian Empires brought grand gifts to honor both the Shah and the Yazata Mithra. Those who could afford it would give vast amounts on this day to the poor and disadvantaged and even provided them with new homes, great feasts, and the like. Through this, gift-giving and charity became crucial components of the celebrations that still continue to this day.

Mehregan is now celebrated with great joy not just in Iran and other Iranian-adjacent countries but also internationally wherever the Iranian diaspora and Zoroastrians are to be found. On this day, Zoroastrian clergy traditionally organize Jashans, celebrations of thanksgiving, and provide prayers and blessings to the laypeople. New clothes are gifted and worn and a celebratory table-altar is set up in Zoroastrian households, community centers, shrines, and temples. This table is decorated lavishly and traditionally includes a Zoroastrian scripture (The Avesta, the Gathas, the Khordeh Avesta, etc.), an incense burner or small fire (usually fed with espand seeds and frankincense), and a mirror as the primary objects. Other items include marjoram, sormeh-dan eyeliner (containing kohl), various flowers and fruits, tasty sweets and nuts, silver coins or other currency, lotus seeds, and some sort of fragrant water or juice (such as rosewater or pomegranate juice).

The central household ceremony usually consists of the entire household and its guests standing in front of the altar-table facing the mirror. Here prayers and hymns are offered followed traditionally by the drinking of either pomegranate juice or the Iranian drink sharbat and the application of the kohl from the sormeh-dan with both being considered blessings against unvirtuous forces (in traditional Zoroastrian communities this can mean the forces of Ahriman, the Evil Eye, and other such cursed actions) and to bring good luck. Seeds of various kinds are then thrown all around in joyous and holy frivolity as the household and its guests embrace and exchange gifts with one another.

What Lessons Can We Learn From Mehregan?

Zoroastrians of all stripes can see Mehregan as a day to not only renew our covenant with Ahura Mazda and all the Yazatas but also our covenants of friendship, love, and duty to our loved ones and each other as a community. It is a festival where we celebrate all the great bounties provided to us and to each other and how it is our duty to help one another and those less fortunate than us who have been unable to access those bounties. As Zoroastrians who love both our feasting and our charitable acts, Mehregan can be a day for both where we invite the community to our households and temples and make sure to provide food, drink, gifts, joy, fraternity, and love to not just our fellow sworn brethren on the Path of Asha but also to the rest of the world.

About the Author
Pablo Vazquez is a proud Zoroastrian and  convert first and foremost and a scholar of the faith and other religious traditions having attained a Masters degree in Religions of Asia and Africa through the Shapoorji Pallonji Institute of Zoroastrian Studies at SOAS University of London. They are currently in the process of publishing an updated translation of the Gathas titled “The Sacred Gathas of Zarathushtra & the Old Avestan Canon” to be released by J.H. Publishing in 2022.
Posted in education, News, zoroastrianism and tagged celebrations, education, festivals, mehregan, Zoroastrian, Zoroastrianism