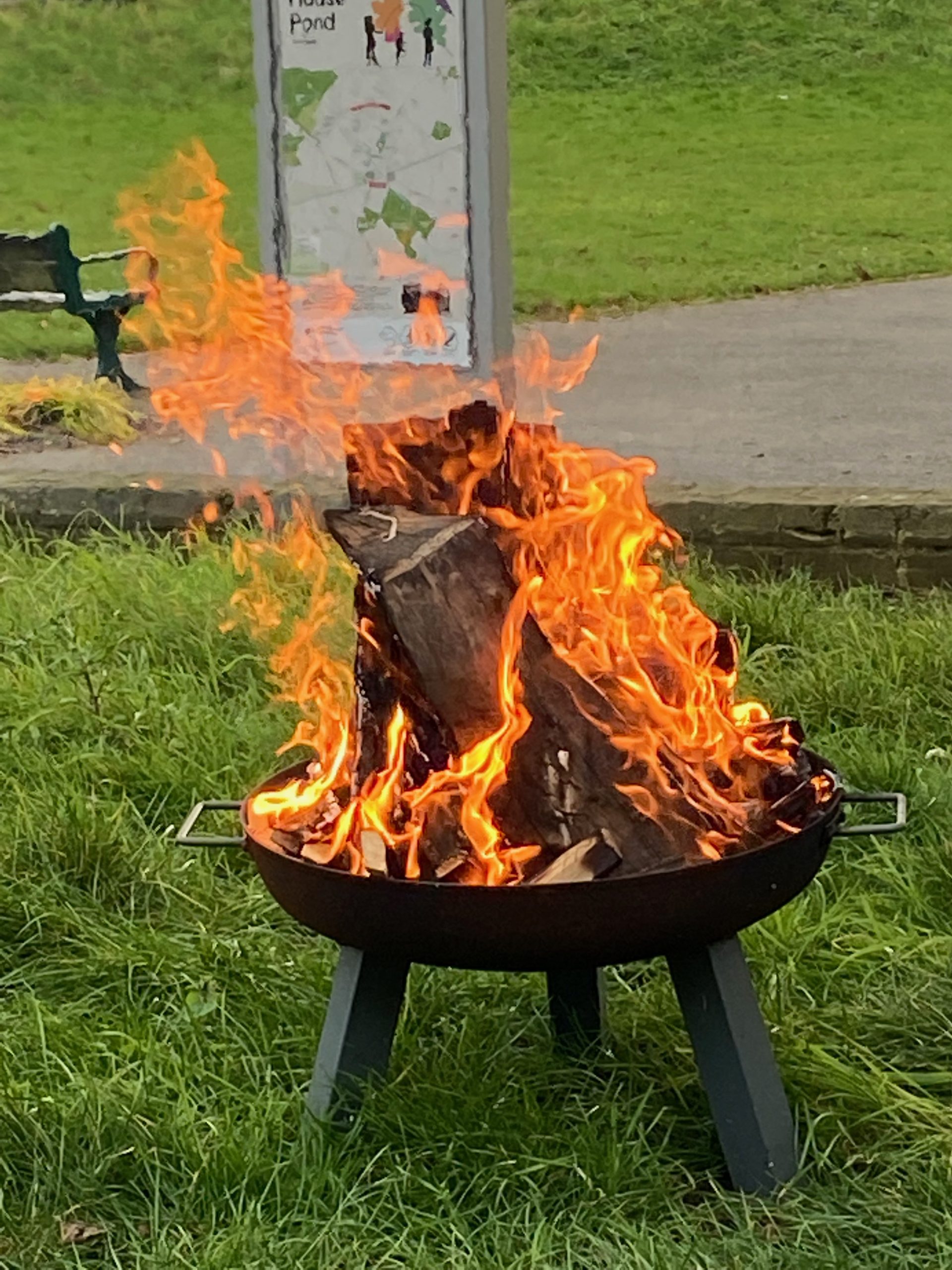 We are delighted to be able an article about the festival of Jashn-e-Sadeh which is celebrated by Zoroastrians this year on 30th January 2022. This article, contributed by Pablo Vazquez, discusses the origins,history and meaning of the celebration as well as how it is celebrated today.

The above photo is from the Sadeh celebration held at World Zoroastrian House in Feltham, UK on 3oth January 2022, which was an opportunity to come together as a community, celebrate and  learn about this festival.

Sadeh (or Sade, Sada, Sadaq) usually occurs around January 30th on the Gregorian calendar depending on the alignment of both the Solar Hijri calendar used officially in Iran and the Fasli calendar used by many Iranian Zoroastrians. While Sadeh is not mentioned in Zoroastrian texts, it has been linked to both the earlier Winter Solstice celebration of Shab-e Yalda/Chelleh (which occurs 40 days prior as Chelleh means “forty”) and the Spring Equinox/New Year celebrations of Nowruz (which occur 50 days and 50 nights after Sadeh as it means “hundred” though this etymology is disputed to this day). It is celebrated across the global Zoroastrian community but most done so among Iranian Zoroastrians and related communities though it has begun to pick up among Parsi Zoroastrians and others. Sadeh is a day of celebration centered around light, fire, dancing, and feasting which announces the coming of Spring and Nowruz while banishing the bitter cold of the Winter.

As mentioned previously in another article on Shab-e Yalda, it is likely that Yalda likely was considered the beginning of a larger 40-day festival known as Sadeh with the final day being what we call Sadeh today. Thus, ancient celebrations likely commemorated the awakening and the start of the ascension of Rapthwin, the Yazata of Summer and Noon, during this festival where he would begin warming the ground and leading eventually to him rising back to his proper place around Farvardin (or Nowruz in some traditions). In fact, Zoroastrian communities in Kerman and Yazd still call Yalda by the name of Sadeh thus marking this ancient connection. Celebrations, as such, were not too dissimilar from Yalda with all the feasting and celebration and also included the lighting of the hearth fire, the ritualistic “feeding” of fires at the shrines and temples, and the lighting of larger public bonfires which were usually the sites of prayer and circular dancing around the fires. Though we find no reference to Sadeh before the Middle Persia period, the celebration nonetheless survived as a Pan-Iranic cultural one as Muslim rulers kept the Sadeh festival alive albeit stripped of its Zoroastrian religious elements. In fact, the absolute earliest record we have of a Sadeh celebration is from the Ziyarid Prince Mardavij in 934 C.E. noting that the Sadeh festival was still considered an important calendrical event.

Historians from various eras have long had speculations as to its origins. Early Islamic historians attribute the origins of Sadeh to the mythical Shah Hushang of the Pishdadian Dynasty who was said to have accidentally struck one stone against another when hunting a serpentine creature while mountain climbing and thus discovered fire. He then set the day as a festival in honor of the fire who he called all to honor and venerate as a gift from Ahura Mazda. Some attributed it instead as a celebration of the mythical Feridun’s victory over the serpentine king, and notorious servant of the Daeva, Zahhak/Azi Dahaka, or to the mythical Zav’s victory over Afrasiab. In fact, historians tend to differ greatly as to what or who the festival is meant to commemorate likely as an attempt to distance the explicitly Zoroastrian religious elements of the festival from Sadeh itself. However, there is a tradition that, while not speculating on the meaning of the day, does hold that the festival was instituted by a Mobad-e Mobadan named Ardashir either in the reign of Shah Peroz (459-484) or Shah Khosrow (531-579) and considering there are records of such a figure it may be a plausible origin date span for Sadeh.

Celebrations, as noted from the records, included the lighting of large public fires, the distribution of toys to children, vast feasting and frivolity around these public fires, agricultural fertility rituals and blessings, the placing of talismans and wards in fields and orchards, and the gathering of the community to enjoy the coming warmth, the warmth of the fire, and the warmth of their company. It seems Islamic rulers would actually attempt to out-do each other as to who could put together the most lavish Sadeh celebrations and some towns in the Iranic world continue such friendly competition to this day with residents of Kurdish villages noted for trying to create bigger and more impressive bonfires than the other villages nearby.

The most popular story relating to its celebration is that of Shah Hushang with almost all of the ancient religious elements no longer attached to the day and with little to no connection to Shab-e Yalda. Great public fires are still built, dancing and feasting happen around them, and families still gather to pray and celebrate together. Zoroastrian shrines and temples, particularly at Chak-Chak, hold their own celebrations and rituals to mark the occasion and particulars of what’s eaten, how they dance around the fire, what songs and prayers and sung, and moreso differ from village to village in such a great variety that it would be truly impossible to pinpoint commonalities. However, there are attempts by Pan-Iranic organizations and diasporic Zoroastrian groups to standardize the celebrations though the main elements of the festival remain the aforementioned alongside whatever new traditions are brought in through modern convenience and circumstances alongside new weathers and new traditions as Zoroastrians have spread all around the world.

What Lessons Can We Learn From Sadeh?

Sadeh is not just an acknowledgment of hope for warmer days, it is a certification of hope in celebratory form by noting that, no matter what the Winter may through at us, we know that those warmer days are indeed coming especially with the life-giving Spring celebrated at Nowruz. We celebrate the warmth of our sacred fires, of that sparked bounty that the Yazata Atar provides, and also the warmth of our blessed community as we come together during one of the coldest times of the year for many of us and banish the bitter cold for a bit. It is a reminder that, no matter what, Ahura Mazda and the blessings of Asha are with it and we will persevere and stand ready to renovate and refresh our world to align it closer and closer to the Path of Asha on the way to the Frashokereti, our spiritual duty to perfect existence. Together, as Ashavans, Sadeh calls for us to light the fires in our hearts and be warmed by divine blessings and our community which is one of the greatest blessings of all.