Fire
The energy of the creator is represented in Zoroastrianism by fire or the sun, both of which embody many of the characteristics of the creative force.

As the creative energy, they are enduring, radiant, pure and life-sustaining.

In Zoroastrian places of worship, therefore, an urn containing fire, which is
kept alive by donations of fragrant sandalwood or myrrh, is the most important feature.

This practice of respecting fire has given rise to disrespectful accusations of idolatry and fire worship, levelled at Zoroastrians by those whose interests were served in misrepresenting this approach to fire.

Zoroastrians, however, see this practice in the same category as the Christians' attitude towards the cross, which is worn around the neck and hangs or stands centre-stage in most churches.

In private Zoroastrians pray in front of some form of light, preferably fire or the sun (or, at night, the moon which reflects the sun), a candle or sometimes an electric light.

All symbolise the creator and focus attention totally, so that thanksgiving, praise and contemplation of the wonders of creation can take place in serenity.

Zoroastrians also have a festival, Jashne Sadeh, occurring in mid-winter, which celebrates the discovery of fire and there is also a prayer called Atash Niyaesh, in praise of fire.

The importance of fire in a pre-industrial era is not hard to understand when there were no matches or lighters, and keeping the fire going in private homes for cooking, heating and lighting was not a simple matter.

Some, therefore, suggest that the Fire Temples were in fact as much local repositories for access to fire as they were centres for spiritual upliftment.

In the language spoken among the Zoroastrians of Yazd (Gavri/Dari), the phrase to turn off (the light etc) is literally translated as putting the fire back home.

The sacred fires which burn in temples today are one of 3 grades of fire, the highest grade fire being collected from 7 natural sources of conflagration, such a haystack fire, a volcanic fire, fire caused by a lightning bolt etc.

Prayers
The corpus of Zoroastrian prayer texts, known collectively as the Avesta, provides both the ideas resulting from the divine revelation, which came to Zoroaster and also historical background through which scholars try to contextualise his life and teachings.

It contains layers of prayers in different languages, indicating additions at different times and suggesting a tradition which underwent linguistic and occasionally philosophical transformation.

The oldest of these languages is found in the Gathas, a text composed in an ancient Iranian language, containing 225 verses in 17 Yasnas.

This text lies at the heart of the prayers and is distinct because of the antiquity of the language.

It is thought to contain Zoroaster's own words.

It is, therefore, this particular text above all other Zoroastrian literature, which should be studied to appreciate the radical philosophy that Zoroaster propounded.

The prayers mainly take the form of praise and reverence (Yasna).

Quote from the Gathas 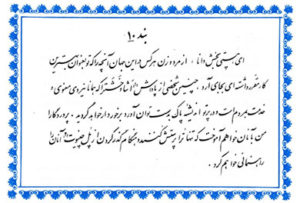 “Whoever, man or woman, O Mazda Ahura! will grant me those things best for existence – the truth for Truth, governance through Good Mind, and those whom I have urged towards Your praise of Your kind, then with all those shall I (Yasna 46.10)

It is significant that the above comes from the Ushtavaiti group which contains the first verse of the kushti prayers.

The verse from Ys.44.16 follows – it contains the all-important declaration that the knowledge of the Religion is for all who satisfy Mazda – in fact it is open for all mankind of Mazda’s choosing.

There is also a corpus of texts known as Yashts, which praise and celebrate entities such as Mehr, Hom, Verahram, many of which must have predated Zoroaster.

Though the grammar or language of the texts often appears to be of later origin, sometimes there are features that appear to be deliberately manipulated to maintain the impression of antiquity to parallel the content which indicates
a very old tradition that had been maintained and passed down, undergoing a transformation in the process.

It is believed that this ancient tradition survived and merged with Zoroastrianism so that the Yashts also have a prominent position in the religious recitations by priests and lay people.

The initiation ceremony which formally introduces a person into the faith is known as Sedreh Pushi among Iranians and Navjote among Parsees.

This ceremony can be undertaken at any age, and theoretically, it should be done with the full understanding and cognisance of the person undergoing the ceremony as the credo known as Fravarane is a statement of accepting the faith.

However, it is often conducted on young children by the decision of their parents.

In India, few Parsees decide not to induct their children through this ceremony whereas, in Iran, it is not uncommon for parents not to organise such an initiation ceremony.

After the solemn process of donning the white muslin Sedreh and the sacred cord, the white Koshti while reciting the basic Avesta prayers learnt by heart in the presence of priests, the event is normally accompanied by present giving and a party.

When people pray or enter religiously sanctified areas, it is customary to remove shoes, and to cover the head with a white (or green) head cover, such as a white scarf for ladies and a white skull cap for men.

Black head covers are completely out of keeping with the colour symbolism of Zoroastrians though somehow black skull caps have entered the Parsee tradition.

Many will read from their prayer books, while others will simply recite the prayers they have learnt by heart.

Candles may be lit by individuals in memory of loved ones and contributions of sandalwood may be made to be put in a special metal dish set aside for this purpose.

Among Parsees, it is customary to place a dab of ash on the forehead, but this is not practised by Iranians.

It is also not unusual to see Parsees kissing the railings surrounding the sacred fire area, or genuflecting before the fire, but this is again not a custom among the Iranians unless they have lived in India for a while and brought this tradition home with them.

The best known of all Zoroastrian prayers is the Ashem Vohu prayer whose transliterated words are:

Its meaning is roughly:

The path of Asha (order, discipline, purity, truth) is the best virtue.

Happiness is for the one who pursues Asha for the sake of best virtue.

Find Out More About Parsees