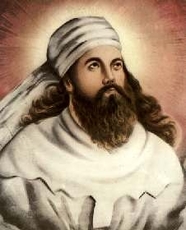 This year Zartosht-No-Diso will be on 26th December 2021, according to the Fasli Calendar. We hope you find the following article about this day, its meaning and how we can commemorate it both informative and enlightening.

This article has been kindly contributed by WZO Member, SOAS scholar and fellow Zoroastrian Pablo Vazquez.

Zartosht No-Diso usually occurs around December 26th on the Gregorian calendar depending on the alignment of both the Solar Hijri calendar used officially in Iran and the Fasli calendar used by many Iranian Zoroastrians. This alignment usually occurs whenever the day of Khorshed (the 11th day) happens in the month of Dae (the 10th month) in the Fasli calendar. While it is likely that Zoroastrians throughout time have commemorated the death of Zarathushtra in some form or another, Zartosht No-Diso is a rather new holiday that likely developed after the popularity of the Shahnameh. It is celebrated across the global Zoroastrian community but most done so among Iranian Zoroastrians and related communities though it has began to pick up among Parsi Zoroastrians and others. Zartosht No-Diso is a day of solemn reflection, study of the Gathas, prayers at the temple and at home, gratefulness for one’s own life, and a celebration of the life of Zarathushtra..

As mentioned previously, we know very little of how Zoroastrians in the past commemorated the death of Zarathushtra but we assume that it may have been rather similar to how it is organized today. Some of the earliest records we have of something like Zartosht No-Diso date from post-Pahlavi times and it seems to have really picked up in popularity in the 20th century and onwards with the festival enjoying a revival of sorts in modern Zoroastrianism. We do know that records of Zarathushtra’s life were heavily mythologized and that elements of the festival likely were centered around remembering aspects of this hagiographical biography and perhaps retelling these stories and even acting them out as plays and the like. Books and even comics were produced in the 20th century revolving around exploring Zarathushtra’s life, of which the Gathas reveal fairly little about but it can said with certainty that oral tradition filled in the gaps of the story with their own tales and legends. An example of such stories can be seen in this popular children’s comic here.

It is mostly a day of prayer, ritual, and reflection on the life of Zarathushtra and one’s own life. If near a temple, Zoroastrians try to make time to visit and engage in their prayers and rituals there and, if not, their home becomes the site of the commemorations. Usually, the Gathas are read, studied, and discussed with other Zoroastrians and folks feast together to celebrate the life of Zarathushtra considering mourning is cautioned against by Zoroastrian tradition for any of those who have died. Instead, their Fravashis are honored and so are their lives as best as possible and remembrance is a large part of that.

What Lessons Can We Learn From Zartosht No-Diso?

Zarathushtra lived an exemplary life filled with both divine inspiration and human worries which makes him someone we can easily connect to. Whether we want to see Zarathushtra as a Yazata, a truly divine being, or as simply a human messenger of divine truth, either way he was the one who set forth our faith and it would be truly virtuous to set aside some time during our day on Zarotsht No-Diso to remember him the best ways we can. Also, it is a good reminder to study the Gathas, Zarathushtra’s words that form the foundation and core of our faith, and reflect upon the endless and eternal wisdom that they provide. Even after his death, Zarathushtra remains with us, his fravashi blessing us constantly, and he is one of the most important people in all of human history. Perhaps, through our reflections on Zartosht No-Diso, we can align our lives to the Path of Asha and be truly worthy to be called Ashavans together.